A Quick Recap of the Recent Changes to Google Search

What’s Hot (and What’s Not) in Google Search Following the Summer SERPs Shake-Up?

Google loves to keep us on our toes, and this summer has certainly been no exception. The recent changes to Google Search have included some rather unexpected developments, attracting the usual blend of speculation and alarm from SEOs, and causing Peter Meyers of Moz to dub July ‘The Month Google Shook the SERPs’.

This post provides a quick overview of the recent changes to Google Search, and gives corresponding advice to help you account for these changes in your online marketing strategy.

So, what’s hot in the SERPs right now?

One of the most important of all the recent changes to Google Search is the Pigeon update of July 24th. The first thing many webmasters noticed following this update was that local ‘pack’ results seemed to be shrinking. These are the short business listings that come up in local searches, which include a name, address, phone number and map pin for each business. Here is what the local pack results currently look like when a Harrogate-based user searches for ‘apartments’: 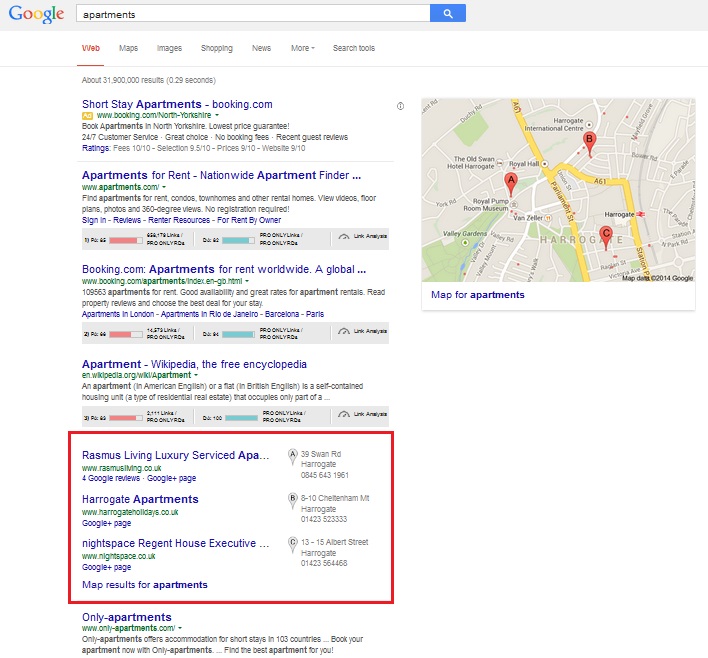 In total, the number of search terms returning local packs has declined by 23.4 percent. This decline is not consistent across search terms or locations, and the number of local packs returned for a given search fluctuates from one day to the next. Some local SEOs have reported an increase in the number of 3-packs and a decline in 7-packs, and Moz’s pre- and post-Pigeon data coincides with this observation: 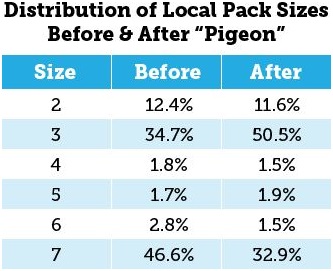 As a result of the Pigeon update, many businesses that were lower down the local pack results have noticed a drop-off in traffic. If this has happened to you, you should concentrate on your organic rankings first and foremost, as these is said to hold the most influence over the top three positions. Make sure your site is well optimised for location, keep putting great quality content out there, and maintain a decent presence across local directories that rank well for your key search terms.

At first glance, it may feel like we’ve taken a step back to a pre-Penguin era – and the Pigeon update does seem to be indulging some rather primitive SEO practices at the moment. However, a panel of top local SEOs advises that, as with all their updates, Google needs a bit of time to fix the issues and clear out the spam. So hold tight, keep up the great work, and your efforts should be rewarded in the end.

On August 6th, Google announced that HTTPS is to become a ranking signal. When you see ‘https://’ at the beginning of a URL, the ‘s’ indicates an extra layer of encryption, which is used to keep users safe on the web. It is mostly used for ecommerce, payment and banking sites at the moment, but now Google wants to see it used across all websites.

In order to incentivise this change, Google has indicated that HTTPS will start having a positive effect on rankings. While it may not be as important as other factors such as relevant, high quality content, it could become increasingly so in the future as Google continues to crack down on security. So whether you’re an ecommerce merchant or not, you may wish to switch to HTTPS in the near future to preserve your rankings, if nothing else.

The presence of in-depth articles has been increasing steadily for some time now. However, SEOs had been paying little attention to them until early July, when suddenly their share of the SERPs more than doubled overnight to 12.7 percent. This example shows the three in-depth articles that are currently being returned by a search for SEO: 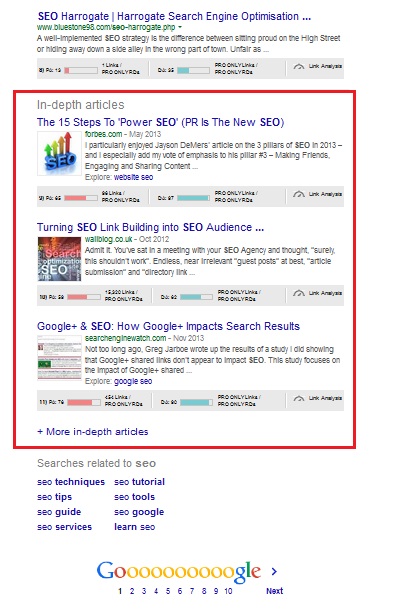 In-depth articles are recognised by Google as good sources of detailed, high-quality content that enable users to explore a broad subject area. Longer-form content of between 1,000 and 2,500 words tends to be favoured, although there are exceptions.

Those who wish to appear in the in-depth listings should ensure that their articles are not only user-oriented but also easy for the search engines to read, with attributes such as headline, image, description, date published, and article body all marked up clearly.

What’s not so hot?

Remember those little author photos that used to appear alongside article snippets in the SERPs? Well, until recently, Google has championed authorship as an essential ranking factor. Then they changed their minds, first removing author photos (June 28th) then binning authorship results altogether (August 28th).

According to John Mueller of Google Webmaster Tools, it just wasn’t working out: “this information isn’t as useful to our users as we’d hoped, and can even distract from those results.”

Of all the changes that Google made over the summer, the removal of their authorship feature is one of the most controversial. However, this seemingly ruthless ‘killing off’ of a feature is nothing new for Google. Wikipedia has an entire category dedicated to services that have been implemented then discontinued when they fail to meet expectations.

Rather than getting disheartened, I think it’s important to reflect on the reasons why authorship was encouraged in the first place – to demonstrate authority, relevancy and accountability – and think about other ways in which you can fulfil these criteria.

Shortly after the initial authorship drop in July, there was a sharp decline in the presence of video thumbnails. Moz reported a 28 percent reduction in thumbnails accompanying their MozCast tracks, although Meyers admitted that they weren’t certain whether or not this change would be accompanied by an overall drop in video rankings.

With the removal of authorship and the decline of video thumbnails, some SEOs have proposed that Google is doing away with rich snippets altogether. However, the increasing (and constantly fluctuating) presence of product, recipe and in-depth article snippets indicates that this is unlikely to be the case

Once again, Google appears to be testing the waters – and again, my best advice is to avoid doing anything drastic, but to continue focusing on the user. Indeed, it’s not unreasonable to assume that all the recent changes to Google Search revolve around the user experience. That being the case, here are my five key takeaways:

When you look at the recent changes to Google Search like this, nothing has really changed. Google is simply continuing to refine its methods of making the good quality content stand out from the mediocre. While we SEOs might feel hard done by at times, our ultimate quest remains the same: to provide a positive user experience.